Originally published in the Puget Sound Registry on October 17, 2017

Since its founding in 1998, Runberg Architecture Group has designed a variety of development types—urban mixed-use, housing and adaptive reuse—throughout the city of Seattle. Recognizing the increasingly pressing need for more affordable housing within and beyond the city limits, Runberg aims to create projects that serve the social, economic and environmental interests of its clients.

We recently spoke with Michele Wang, principal at Runberg, about some of the organization’s current projects and the impact she hopes they will make in Seattle. Wang has a background in the design of single and multi-family residences and environmental graphics for civic spaces and brings more than 15 years of design experience to the firm’s work in urban housing development with an emphasis on student and affordable housing. Michele has designed and managed many of the firm’s most innovative affordable housing projects, including the award-winning Denny Park Apartments, the Cate Apartments and the Borealis Apartments.

Tell me a bit about yourself and Runberg Architecture Group (the company’s founding, who Runberg hopes to serve currently, etc.)? How do your personal values align with those of the company?

Brian Runberg founded the company in 1998 with the goal of elevating the level of design in the multifamily marketplace. At that time, generic EIFS boxes were a fairly common approach to apartment construction. The first few years of the firm’s existence were spent just getting a foothold, starting small, but with a focus on increasing the density of housing available in the city—primarily urban infill sites, underutilized lots, steep slope or mixed-zoning sites.

I joined the firm in 2000, and we were awarded our first affordable housing / low-income housing project by the Low Income Housing Institute (LIHI). That first LIHI project (the Cate Apartments) included funding from multiple public and private sources, resulting in different targeted populations to be served: affordable family housing, disabled and veteran housing, low-income housing, workforce housing. Our firm chooses to serve both market-rate and affordable/low-income housing needs out of a recognition of the importance of that range of experience that we all live through over the course of our lives. Today, I head the affordable housing work for our firm that partners with many different non-profits, all of which are rewarding as they address a multitude of housing issues for our region.

Runberg’s philosophy asserts that the quality of life is highest in places where social, economic and environmental interests are in balance. How do Runberg Architecture Group’s projects achieve this equilibrium for its clients?

We believe that when these interests are in balance, there is not one overriding ideology, but rather a collection of decisions that take into consideration social, economic and environmental impacts, to arrive at what makes sense in each particular situation. This way, every project has a unique response. It starts in pre-design partnering with a client whose values are aligned with this approach and who is able to look at the broader potential. For example, is it the sole priority to maximize density on a site? Or does creating more open space in the public realm contribute to the overall desirability of the neighborhood and actually add significant value? We have demonstrated our work can be both financially sustainable and environmentally sustainable and serve as a precedent for others. The hard data of a cost-benefit analysis lead back into design solutions that will make a project a more attractive place to live and be successful.

For example, Stack House (in South Lake Union) preserved a historic brick laundry building, incorporated significant open space as public through-block connections, provided rooftop urban agriculture (imagine your own CSA on your roof!), and achieved a density of energy usage that outperforms Passive House standards. In doing so, it contributes to the livability and desirability of the South Lake Union neighborhood, which in turn drove its success in outperforming investment targets.

As we all know, the need for affordable and low-income housing throughout Seattle and the surrounding region remains as pressing and critical as ever. What are some projects that Runberg is currently working on? What are some noteworthy projects currently in the pipeline/undergoing design review by the city?

Our firm’s affordable housing work currently includes two important projects that are engaged in battling the crisis of homelessness in Seattle. Mercy Housing NW is developing a site in the Mount Baker Urban Center for 95 units of housing for families facing homelessness with support from the Paul G. Allen Foundation and the City of Seattle. Another with DESC (Downtown Emergency Services Center) is focused on serving chronically homeless individuals and is developing a site in North Rainier Urban Village for 100 units. Although they are serving quite different populations, both strategies employ integrated services as a critical component to their residents’ ongoing well-being.

As land becomes increasingly scarce in Seattle, we find non-profit housing developers making multiple uses of underutilized sites. For example, LIHI has developed partnerships with homeless encampment organizations to host Tiny Houses on sites that are awaiting funding for development. Several years ago when LIHI acquired an office building in the downtown International District, we worked with LIHI to permit its conversion to a homeless shelter, and now we are working on a design for developing the site into 69 units of workforce housing, neighborhood retail and office space. That project will be having its Design Review Recommendation hopefully by the end of the year. 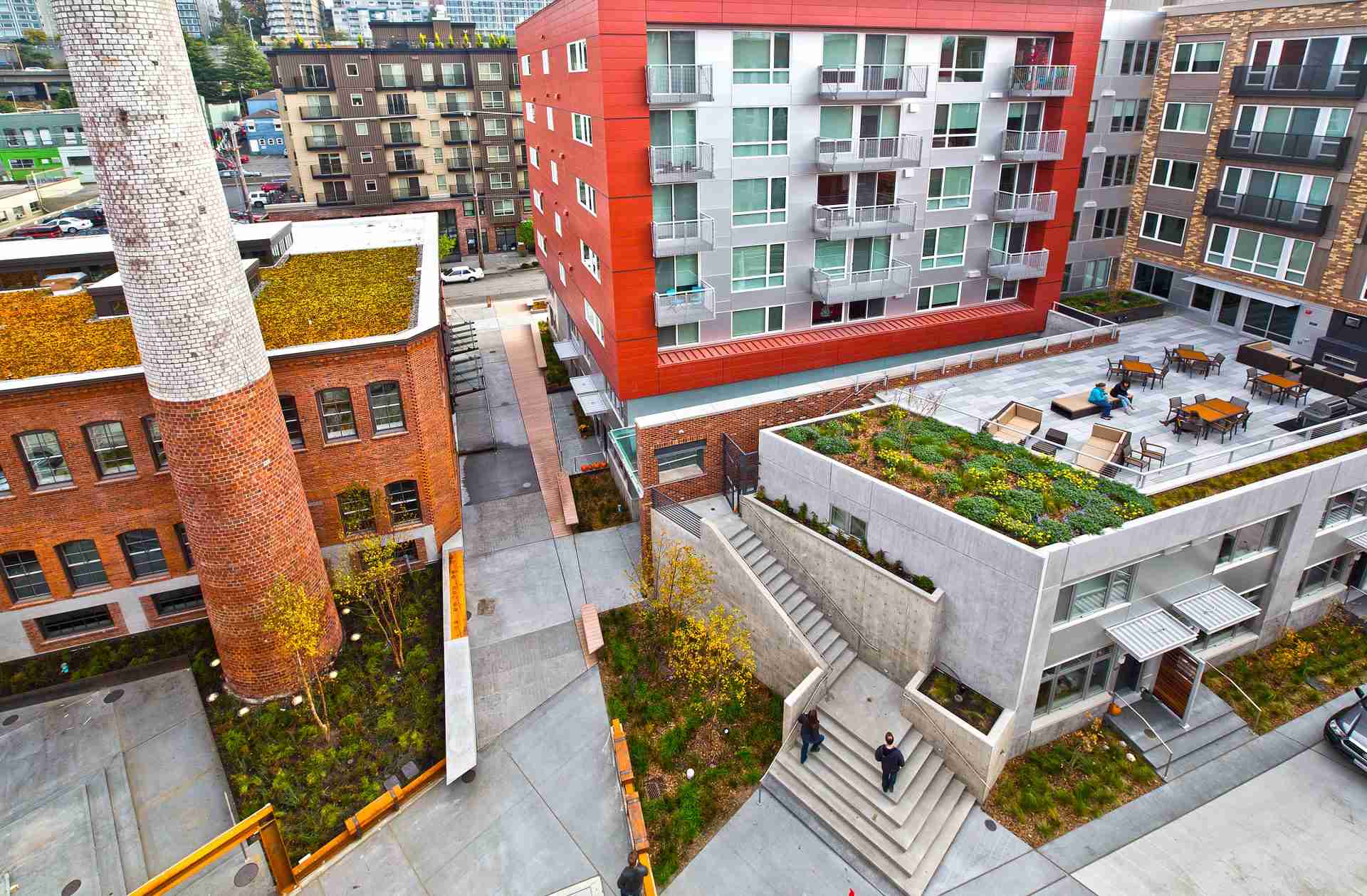 Can you speak a bit about the different project types (urban mixed-use, housing and adaptive reuse) and the decision process that goes into opting for a particular project type?

Our first question is does a project align with our values—does it contribute to the social, economic or environmental well-being of its place? Urban mixed-use and non-profit affordable housing—these are no-brainers. Our city needs more housing to counter the escalating rents driven by demand! The more unusual example might be: an adaptive reuse project of a historic church, as we encountered with the Sanctuary project a decade ago. It was only financially feasible if the landmarked structure was developed into luxury townhouses. Normally we would ask ourselves, does Capitol Hill really need twelve more luxury townhouses? But the overall value to the community fabric of re-using a historic church, which would otherwise be demolished and the land sold at an even higher price, was the overriding consideration in this case. Another unusual example is suburban housing that is demonstrating a potentially game-changing environmentally-conscious technology, such as CLT (cross-laminated timber), that could help move the market towards greater housing affordability.

Projects such as Yesler Terrace necessitate a consideration of the historical, cultural and contemporary context of certain neighborhoods and areas. How do your projects aim to strike this balance (i.e., respecting the history and context of the site while also creating something in Runberg’s unique individual vision?

Certainly, all projects necessitate this consideration, and it is particularly important when a neighborhood is facing displacement and gentrification. Our highest priority is that a project fosters a strong sense of place. Housing is about placemaking in the fabric of our city. We feel most successful when a building fits into its neighborhood, when it feels welcoming and gracious, and when it offers new possibilities while maintaining and supporting the existing community. Vulcan’s 532-unit development at 23rd and Jackson in Seattle’s Central Area, a historically African American neighborhood, is one example. We worked closely with dozens of community leaders through scores of outreach meetings, dozens of design meetings with a focus committee, and public open houses. The resulting design reserves significant open space in the public realm that can host community gatherings, small retail opportunities for mom-and-pop stores, a mixture of 20 percent affordable/80 percent market-rate housing, and a grocery store, all on the underutilized site of a former grocery store and surface parking lot. There are no shortcuts in this process, or else you end up with pastiche and design-by-committee buildings. By truly engaging, we feel the final result is more authentic, and successfully demonstrated in a single Recommendation meeting saving many months in the entitlement process. Responsible design is good business!

How does Runberg implement community resources and amenities with the housing projects themselves? How do the projects strike a balance between the needs of the residents and the members of the surrounding communities?

We will typically look at a layering approach to develop a sequence of spaces from public to semi-public to semi-private to private. The public interface of the building with the community is important in the feeling that the building belongs. The private places of living are important to a sense of ownership and pride. This is important whether the housing is low-income or market-rate, although the activities and services provided may be different.

For non-profit developers who are competing for public funding, the Seattle Office of Housing issues a Notice of Funding Availability once a year, usually in the summer, where the priorities and available funds are identified. This year there was about $50 million available, and the awards are then leveraged into additional funding from other sources. (Last year, Office of Housing reported every dollar awarded leveraged $2.30 additional funding). There is then a flurry of activity where we might be refining a feasibility study to match up a need with opportunity. We would arrive at a conceptual design that is submitted by the developer with the funding application, usually in September, and we would find out if a project is awarded funding in November. Throughout, the developer is doing neighborhood outreach, so that when a project is funded, it can be off to a quick start. For these projects with public funding, I think the city is doing a fair job of prioritizing these projects moving through the entitlements process, assigning them a high priority in the system and designating city staff at various departments as facilitators. From a larger perspective, I know the city is implementing measures to reduce the obstacles to developing housing. City Council approved changes to the Design Review process just this month, but we will not see them take effect until next July.

Is there anything else that we should be talking about?

It’s an important aspect of our society that we incorporate affordable and low-income housing in the heart of our communities and not out on the fringes. We need to support the development of mixed-income neighborhoods where the diversity of life is engaged every day.