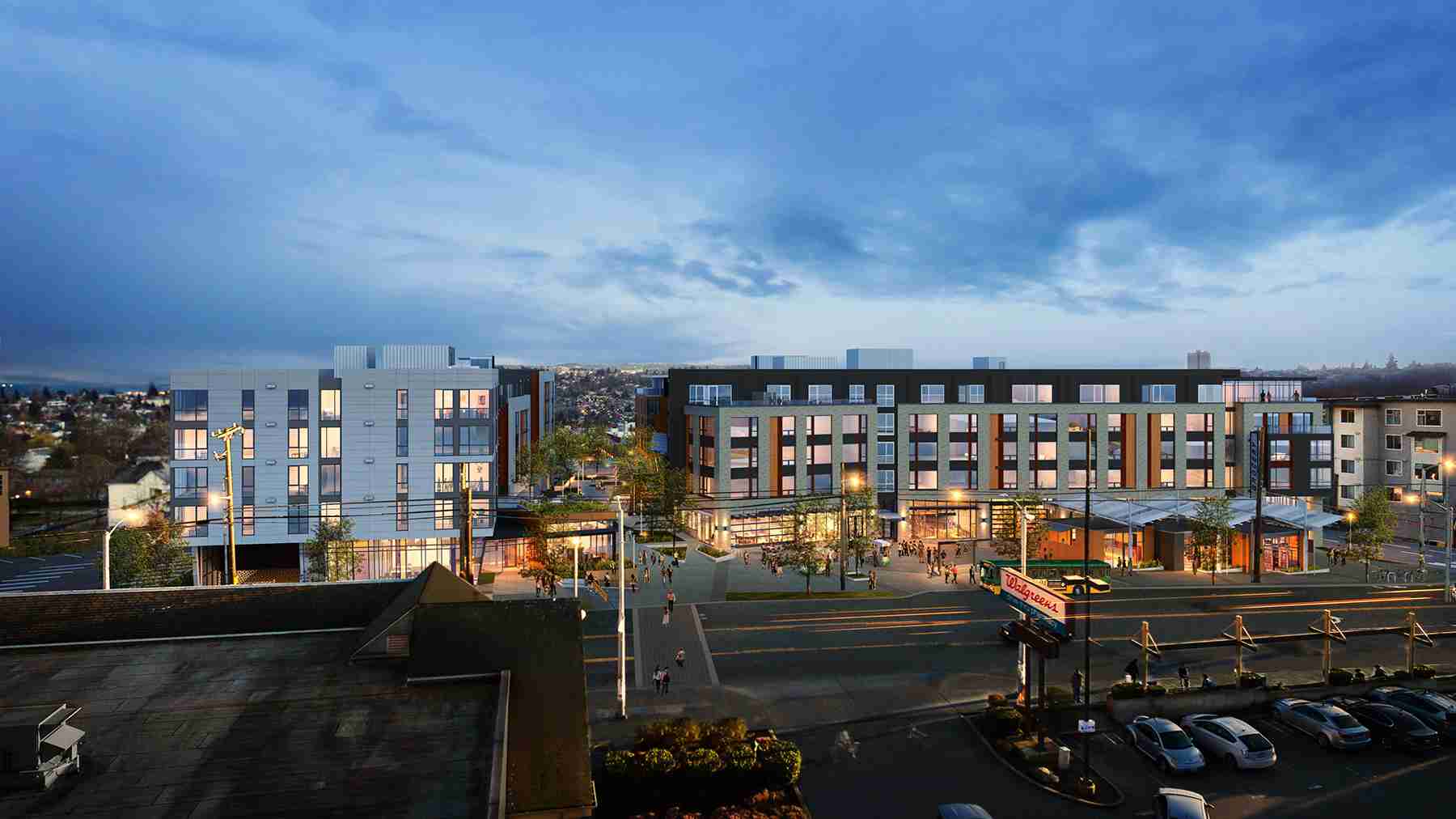 All around the world, metropolitan areas are growing. Look around your own neighborhood and you’ll see evidence of that growth. In 2016, nearly 60 new people arrived in our city each day.

As Seattle becomes more populous, it is essential that new housing is built to accommodate growth and to ensure homes remain affordable for new and existing residents. The city’s urban village strategy densifies housing at key nodes within existing neighborhoods that are served by an expanding transportation network and improved access to services for new and existing residents.

This sort of rapid transformation — even when it’s inherently positive and undertaken for the right reasons — can be discomfiting for current residents, who may fear that the character of their neighborhood will be altered amidst the wave of changes.

For this reason, it’s important that architects and developers approach new developments with sensitivity. We believe that it’s possible to create spaces that strengthen the existing cultural context of a neighborhood while also addressing future needs in a sustainable way. Doing so requires research, cooperation, and dialogue.

This is the approach that and Vulcan Real Estate took in planning a new development called Jackson Apartments at the site of the former Promenade 23 shopping center in Seattle’s Central Area. This ambitious urban redevelopment project is the product of collaboration between Vulcan, Runberg, Seattle’s Office of Planning & Community Development (OPCD) and its Department of Neighborhoods, many passionate and involved residents of the Central Area, and a host of other dedicated community stakeholders.

The result is something truly special: a development that springs directly from the community’s vision for what is needed to enhance the neighborhood’s health, culture, and vitality.

Jackson Apartments will have a 12,000-square-foot plaza that connects people and community.

In 2013, the OPCD, the Department of Neighborhoods, and a wide range of community-based groups and stakeholders worked together to design a framework that reflects the vision, goals and unique character of the Central Area community. The resulting urban design framework outlined objectives for the future growth and development of this vibrant part of Seattle, including the redevelopment of Promenade 23.

Vulcan Real Estate purchased the Promenade 23 property in 2016 with the aim of transforming it into a mixed-use development. When completed the development will comprise 44,000 square feet of ground-level retail and 532 residential units, including 107 units targeted at households earning between 65 and 90 percent of the area median income.

Together, Vulcan Real Estate and Runberg Architecture Group embraced the newly established urban design framework and set about an unprecedented engagement process with Central Area community groups and stakeholders. Over a two-year period, we conducted more than 100 meetings, open houses, and forums to listen and respond to input from neighbors and stakeholders. This feedback, along with the community vision set forth, guided the design for the development at 23rd and Jackson at every step of the process.

Successful urban design both celebrates and cultivates a unique sense of place. Our design was directed by a passion for placemaking and a desire to preserve the things that make the Central Area unique. Based on feedback from the community, the facade of the new development will incorporate a palette of colors and unique fractal patterns and textures that subtly reference the area’s rich cultural heritage.

Vulcan is also partnering with the Historic Central Area Arts and Culture District to commission local and regional artists to produce public art that will pay homage to the area’s history and culture.

Local businesses — think bakeries, coffee shops or your favorite ethnic restaurant — are essential to the fabric and soul of our neighborhoods. They contribute to the unique tapestry of a place and can’t easily be replicated elsewhere.

Unfortunately, these businesses can be susceptible to being overrun or excluded during times of rapid growth. During the redevelopment process, Vulcan worked to help tenants of Promenade 23 relocate within the neighborhood, often within a few miles of their original location.

And in response to the community’s call to support mom-and-pop businesses, the retail portion of the new development will feature both freestanding pavilions for micro-businesses and modular storefronts suitable for vendors of all sizes. Our hope is that the space can serve as an incubator for up-and-coming businesses and pave the way for continued economic growth in the neighborhood.

Freestanding pavilions will cater to micro-retailers and modular storefronts for vendors of all sizes.

It was important that the new development both blend into the neighborhood and support a healthy and stable community.

Despite being within an up-zone boundary, the team opted to follow the existing familiar zoning pattern, resulting in a development that is 10 to 20 feet shorter than permitted and with extensive building setbacks from street edges for enhanced landscaping and pedestrian walkways. Furthermore, the residential facades of the development were designed to create respectful transitions to neighboring homes.

In a design move not common in this current development climate, Vulcan is incorporating a 12,000- square-foot plaza into the design at 23rd and Jackson. This marks a deliberate effort to respond to the community’s desire for connected people and community.

The plaza provides a dynamic outdoor gathering space for community events and celebrations, as well as infrastructure for seasonal kiosk vendors such as a farmer’s market. Additionally, a 60-foot-wide mid-block pedestrian mews enhance the walkability of the neighborhood.

This space will also feature a garden with diverse plant species chosen for their ability to serve as a habitat for native pollinators. Bioretention planters and water-efficient irrigation ensure that stormwater collected from 80 percent of the project’s footprint will be filtered before entering the watershed, contributing to the development’s Salmon-Safe certification. Continuing the theme of environmental sustainability, the project is pursuing LEED platinum certification.

The development at 23rd and Jackson was only possible thanks to the tremendous efforts of and partnership between the community, private sector and public entities. This groundbreaking collaboration has resulted in something exciting: a development that fulfills a shared vision to create a livable, supportive place and to improve the health and equity of the Central Area.

This development should also serve as a model for sustainable development as Seattle continues to grow and change.