By: Constanza Marcheselli and Brian Runberg

The Seattle-Bellevue Metropolitan area is facing an urgent question: How do we accommodate the estimated 1.8 million people that the Puget Sound Regional Council projects will arrive in the region between now and 2050?

The pressure is on today to ensure that the region remains livable and sustainable for current and new residents to avoid overwhelming existing infrastructure, to both shepherd growth in a way that aligns with newly adopted energy targets and sustainability goals, and to prevent already skyrocketing rents from rising even higher and pushing lower-income residents further out of our cities.

With so many competing demands, how do we approach development with thoughtful care, not expediency, as the driving imperative? How do we create neighborhoods that are equal parts functional, sustainable, appealing, and responsive to their respective context?

To answer this question, planning authorities throughout our region have had the foresight and vision to implement the practices of transit-oriented development (TOD), a way of organizing dense urban neighborhoods that’s as appealing as it is responsible.

TOD aims to group life in such a way that the neighborhood becomes a hub for most daily activities, centered around easy-to-navigate, mixed-use developments that give residents the flexibility to walk, bike, or take public transportation to the majority of their destinations. According to the Transit Oriented Development Institute, TODs can reduce driving by as much as 85%, resulting in a whole host of benefits for communities and their residents, including lowered carbon footprint, easier commutes, and less traffic congestion.

In a nutshell, TODs tend to be vibrant, pedestrian-friendly neighborhoods that combine multifamily residences, entertainment options, and commercial and office space all within half a mile of light rail or streetcars.

It’s also not a new concept — in cities throughout Europe, such as Copenhagen and Paris, TODs have long demonstrated an ideal planning strategy for accommodating increased density in urban development. Here in the U.S., TOD has been on the rise for decades. Since light rail was first introduced in the nation’s capital in 1976, dozens of TODs have been constructed along the area’s six Metro lines, both downtown and in the surrounding suburbs of Maryland and Virginia. 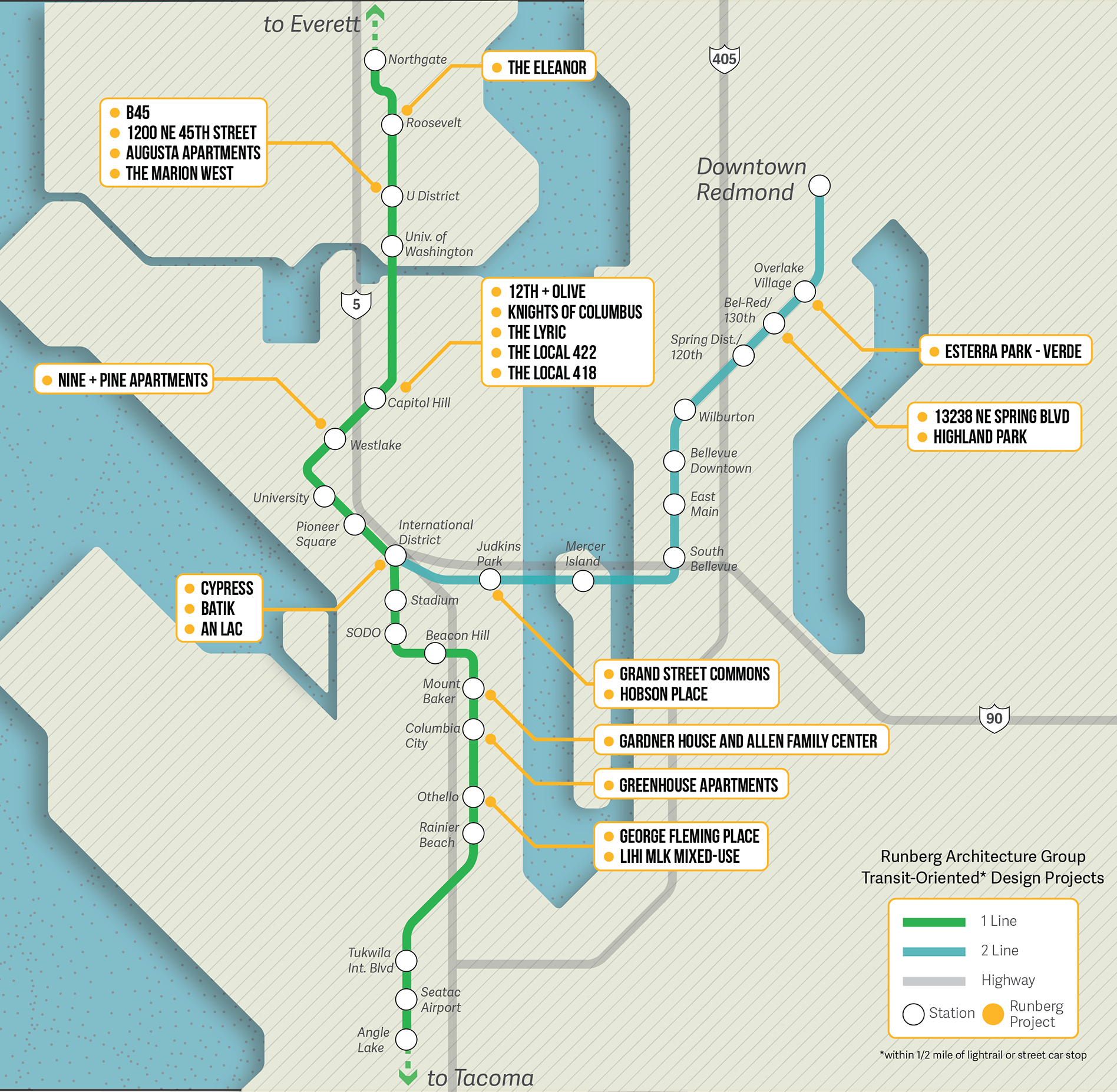 Runberg-designed projects can be found next to many of Sound Transit’s light rail stations.

THE RISE OF LOCAL TOD

In our corner of the nation, we’re late to the game. However, we’re now starting to realize the benefits from our current wave of new transit-oriented development across the greater Seattle-Bellevue region. The Northgate Link Extension, renamed to the “1 Line”, opened its doors to passengers for the first time last weekend. It’s part of Sound Transit’s plan to triple the area’s light rail between now and 2024, with additional stations planned for East King County, Tacoma, Lynnwood, and Federal Way. Wherever you travel in the region, it’s hard not to see this growth. This exciting period of expansion gives area leaders the chance to not only shepherd the region’s growth in a sustainable way, but to improve quality of life for countless residents.

Areas such as the Bel-Red neighborhood, situated between downtown Bellevue and Redmond’s Overlake neighborhood, are already under development in anticipation of this expansion. Environmental enhancements — including expansion of green spaces, riparian corridors, and improved stormwater management — are central to the design, in keeping with the neighborhood’s commitment to sustainability. Mixed-use properties, public art, a planned arts district, and playful design will contribute to the neighborhood’s distinct character, transforming an area more recently known for its underutilized warehouses and disused industrial facilities into a vibrant community and commercial center.

As the design firm behind Verde at Esterra Park, as well as Ondina, Runberg Architecture Group is proud to be part of this vision. Ondina, which will break ground this fall, is a 249-unit project adjacent to the upcoming Bel-Red light rail station. The building’s massing and design reference the neighborhood’s industrial past while simultaneously looking to the future. Wide sidewalks, bike lanes, and recessed stoops at grade create a neighborhood feel, while two metal-clad volumes at the building’s base establish a common vocabulary between the lobby and the neighboring light rail station.

Likewise, Verde, a 634-unit residential development just south of the Microsoft campus, is designed to highlight the property’s unique topography. The development, which abuts a lush, 2.6-acre park, sensitively shapes the site’s challenging grade into a celebrated feature, with unique stepping of the building masses mimicking the natural landforms and patterns of the Sammamish Valley. It will also be one of the first LEED Zero certified properties in Washington state, a new level of achievement in green building. The result — an eco-friendly, multifamily property that gives the impression of having risen out of the park, fully formed — is utterly unique.

In our design, the team strived to build on what was already present to define a distinct sense of place that will change and evolve along with the neighborhood, all within 200 yards of Overlake Station. Slated for completion in the summer of 2022, we’re confident that the result will be human centered, aesthetically pleasing, and memorable. That type of design alchemy creates a neighborhood that’s greater than the sum of its parts. Not just a practical response to the region’s explosive growth, but the kind of place where people want to be. That is the magic of TOD and why we believe it’s the future of sustainable and responsive development, both here in Washington and in urban centers across the country.

Over the last decade, Runberg has designed 23 such TOD projects throughout the region, totaling 4,900 units and approximately $1.2 billion in construction. By tracing the paths of the forthcoming and existing transit lines in the Seattle area one can see how TODs can address the pressing need for increased housing density while making neighborhoods livelier and more appealing.

Lively, like B45, adjacent to the historic Neptune Theatre and just steps away from the University District light rail station in Seattle. Appealing, like Grand Street Commons farther south near Judkins Park Station, which will soon transform a formerly contaminated brownfield site into a mixed-use hub combining affordable and market-rate housing with an engaging public gathering place and retail options.

Each of these properties is one of a kind. They are proving that density doesn’t have to come at the expense of personality and placemaking. 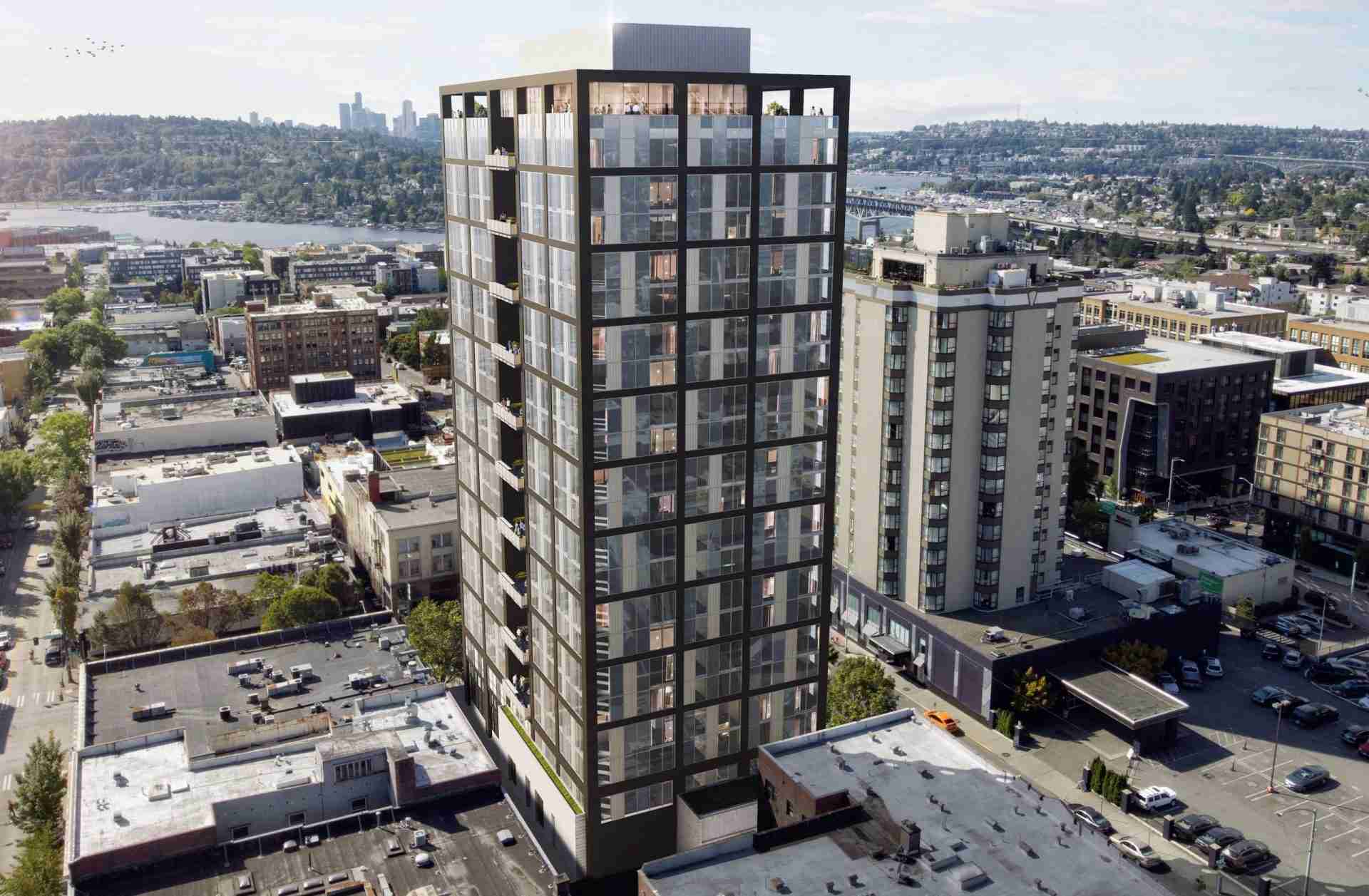 B45 tower will rise on the corner of Brooklyn Avenue Northeast adjacent to the U District light rail station.

Any plan for the future of the region should include people of all economic strata. Another powerful benefit of TOD is its capacity to expand access to affordable housing in the city, allowing low-income workers, who often don’t have cars, to live closer to where they work.

Gardner House and Allen Family Center, whose uniquely carved open form is inspired by the glacial action that formed the Rainier Valley, offers 95 units of one-, two- and three-bedroom housing for low-income and homeless families. An Lac, inspired by Vietnamese “tube houses” and located in Seattle’s International District, is a mixed-use building that we designed for the Low Income Housing Institute (LIHI). It combines 69 units of affordable housing, retail space, as well as office space occupied by LIHI’s offices. These much-needed affordable housing developments will soon be joined by George Fleming Place and Hobson Place, which are both slated for completion later this year.

Massive population growth over the next three decades in the Puget Sound region is inevitable. The question is how we — both as a community, and as part of the design and development industry — intend to accommodate it responsibly. For us, TOD is the obvious planning strategy. TOD can mean healthier, more equitable, and more interesting neighborhoods, along with lower carbon footprint and less urban sprawl. That’s a triple win: for the region, its people and the planet.